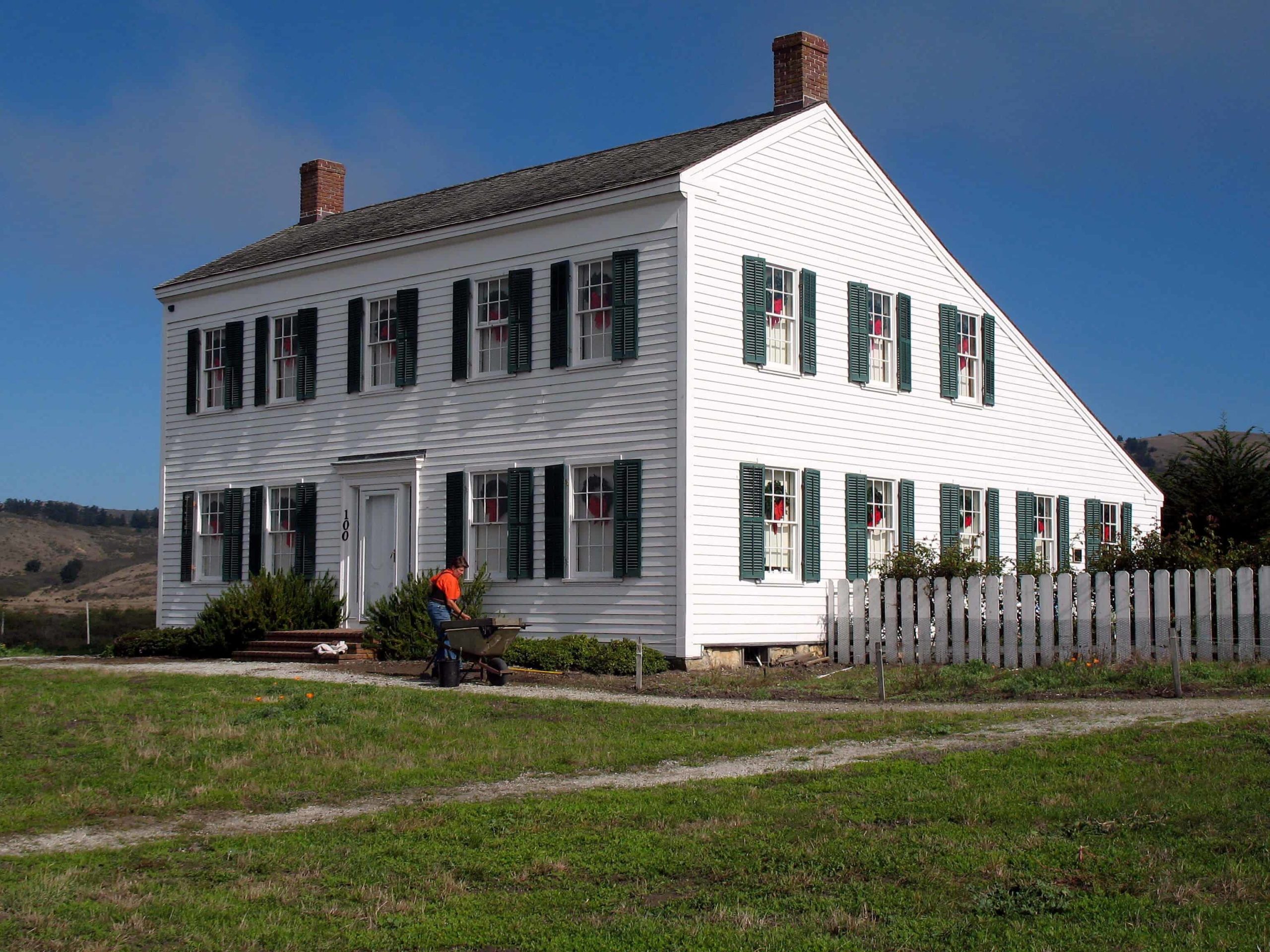 The White House of Half Moon Bay Holiday Celebration

Each year, during the first two weeks in November, the public is invited to shop for unique holiday gifts while supporting the restoration of a beloved landmark. Make it a day trip – visit Highway 92 Succulents nursery in Half Moon Bay and take in the holiday festivities at the White House.

James Johnston’s White House sits on a low ridge east of Highway One, just south of Higgins Canyon Road. The classic New England saltbox was remarkable for its time, a contrast to the small adobes of San Benito – the town we know today as Half Moon Bay.

It was built between 1853 and 1855 for Johnston’s bride Petra Maria de Hara. From the exterior it looks transplanted – straight from the east coast – but there’s a chapel inside, and the home once included a walled garden and separate cookhouse that reflected Petra’s Californio sensibilities. It’s the blending of cultures that makes the story of the place and the family so compelling.

Johnston came to California in 1849. Some say he tried his hand at mining, but he’s most often associated with real estate speculation. He was part owner of the elegant El Dorado Saloon, a famous San Francisco watering hole. There he became acquainted with prominent Californios, holders of large tracks of land originally granted by the government in Mexico City.

The late 1840s and early 1850s were tenuous times for the Californios. The Treaty of Guadalupe Hidalgo, which ended the Mexican-American war in 1848, was supposed to protect their property rights, but many Californios lost their ranchos: some lacked the proper documents or hadn’t done the surveys according to American standards. They were property rich and cash poor and it was expensive to hire lawyers to perfect their claims. The Californios who managed to hold on to their homes, often found themselves with a mountain of tax debt because the Americans imposed a system of assessing acreage instead of production.

James Johnston was sympathetic to their plight and tried to help. He enjoyed favor with many of the old Spanish families, so when he asked for the hand of the lovely Petra Maria de Hara, it was given. He built their home on 1,162 acres of the Miramontes family Rancho de San Benito, which encompassed what is now the southern part of Half Moon Bay.

Johnston’s grand scheme for his life in California included a proper Yankee house at the center of an eastern-style dairy ranch. The vision became reality when his brothers Thomas and John successfully traveled to Ohio, rounded up a herd of dairy cows, and drove them west. James Johnston became the wealthiest man in Half Moon Bay and his multi-cultural “white house” became a community center.

Now listed on the National Register of Historic Places, the house first survived over 100 years of weather, abandonment, vandalism and high winds before it was discovered, in 1962, by Joan and Malcolm Watkins. The couple was honeymooning when the classic salt box first caught their attention. Using Joan’s photographs of the house, Malcolm wrote a monograph for the Smithsonian Institution, where he served as chairman of the Cultural History Department. Later, local preservationists found and used his writings. In 1971, the Johnston House Foundation was incorporated “to protect, preserve, restore and refurbish the James Johnston House and to promote the history of the Coastside and California”.

The restoration has been an ongoing for over forty years, and the Foundation’s work has resulted in the house as it appears today. Central to their mission is fundraising, and the mainstay of that effort, in addition to grant writing, is the popular Holiday Boutique, which combines shopping with an opportunity to tour the historic home. Decorated Christmas trees grace every room in the house. Unique holiday wreaths, gourmet treats, hand-crafted jewelry and arts and crafts are available to purchase. Take a break from the mall and check it out.

In addition to the boutique, the Foundation also hosts a fund raising high tea: during the weekend boutiques at 1 p.m. Reservations Required.