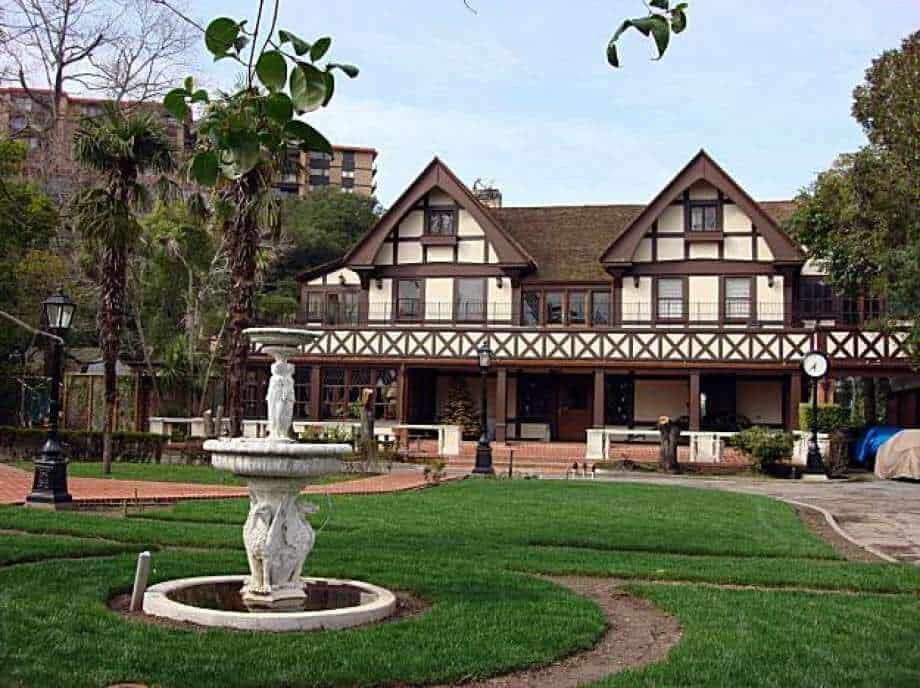 Many visitors to Highway 92 Succulents nursery come from San Mateo or other towns on the peninsula. There’s an unassuming house just off the El Camino with a history that might surprise you. Check it out on your drive to Half Moon Bay.

When Time magazine published profiles of the 100 most important people of the twentieth century, Amadeo Giannini was among them. A.P. Giannini founded the Bank of Italy – a financial institution for the working man – which ultimately became Bank of America.

For many years Giannini lived in downtown San Mateo. His home, a two-and-a-half story Tutor Revival cottage known as Seven Oaks, is located at 20 El Cerrito Avenue, just one block west of El Camino Real. The house was constructed in 1901 by a business associate. Giannini and his wife Clorinda took residence there in 1905, one year after A.P. founded the Bank of Italy in San Francisco’s North Beach neighborhood.

The Bank of Italy began in a converted saloon with $150,000.00 capital borrowed from his step-father and ten friends. It is said that Giannini kept the bartender on as an assistant bank teller. His objective was to establish an institution that would lend to hard working immigrants, who at the time, were unable to get credit.

A.P. Giannini was born in San Jose in 1870, to immigrants from Genoa, Italy. At age seven his father, a farmer, died in a fight over a dollar. His mother re-married Lorenzo Scatena, a teamster who also sold produce. Young A.P. left school to assist him and by 19 was a successful partner with a reputation for integrity. At age 31 he sold his half-interest in the produce business to his employees and retired.

Within a year, A.P. accepted an invitation to join the board of the Columbus Savings & Loan Society, a modest bank in North Beach, but soon found himself at odds with the other directors who had little interest in extending loans to immigrants. It was a time when banks existed to serve businessmen and the wealthy. Giannini tried to convince the board that it would be profitable to lend to the working class, which he believed would be credit worthy. The board refused and Giannini left to start his own bank, aggressively soliciting business.

In the wee hours of April 18, 1906, A.P. was waked by the the great quake. One story tells how he acted quickly before the terrible fire could reach the Bank of Italy headquarters at Columbus Avenue and Washington Street. Loading all the money, securities and records into two wagons, he and his associates spirited the holdings to the relative safety of Seven Oaks.

His foresight saved the enterprise and allowed him to re-open the bank nine days later. Giannini again broke ranks with fellow bankers, many of whom wanted to remain shut to sort out the damage. He quickly set up shop on the docks near San Francisco’s North Beach. With a desk made from wooden planks straddling two barrels, he began to extend credit “on a face and a signature” to small businesses and individuals. His actions spurred the city’s redevelopment.

Giannini’s mark extends far beyond San Francisco, where his determination and advocacy for “the little people” helped build what was, at the time of his death, the largest bank in the country. Today we take the things he pioneered: home mortgages, auto loans and installment credit, for granted.

Time reported that Giannini also made a career out of lending to out-of-favor industries. He helped the California wine industry get started, then bankrolled Hollywood at a time when the movie industry was unproven. In 1923 he created a motion-picture loan division and helped Mary Pickford, Charlie Chaplin, Douglas Fairbanks and D.W. Griffith start United Artists. When Walt Disney ran $2 million over budget on Snow White, Giannini stepped in with a loan.

He died at age 79; his estate was worth less than $500,000. He wasn’t interested in accumulating immense personal wealth and for years drew no pay from Bank of America. Upon receipt of a surprise $1.5 million bonus, Giannini promptly gave it all to the University of California. “Money itch is a bad thing,” he once said. “I never had that trouble.”

Seven Oaks is listed on the National Register of Historic Places. Though not open to the public, the house and garden can be viewed from the street.