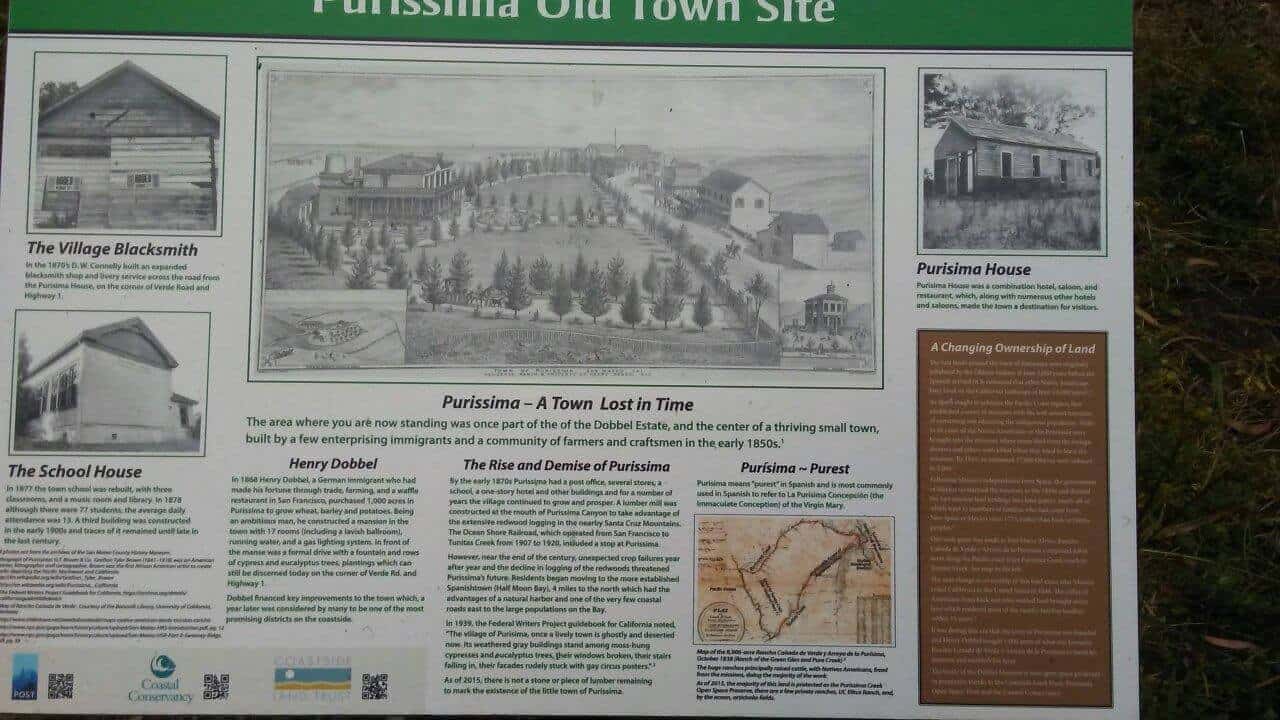 Of Ghost Towns and Ghosts

Several years ago, I heard there was a ghost town and an historic cemetery on Verde Road, just south of Half Moon Bay. I regularly jogged on the trails in Purisima Creek Redwoods, and occasionally I would brave the poison oak and berry brambles near Highway One and Verde, hoping to stumble on a headstone or some remnant of the early settlement, but I never found it – until recently. If you’re coming to Half Moon Bay to visit Highway 92 Succulents nursery, you might want to visit this historic site.

Purisima, established in 1853, was once the most important town on the San Mateo County coast, rivaling Half Moon Bay. Early pioneers came to farm; a lumber mill was constructed at the mouth of Purisima Canyon to cut redwood pulled from the Santa Cruz Mountains. Oil was discovered near the village in the 1880s, on George Shout’s land, but the well proved relatively unproductive. Only 20 barrels a day were drawn, not enough to support a boom.

During the town’s early years, there was no cemetery. Up to the 1860s, the deceased were officially buried in Half Moon Bay or unofficially buried on ranch lands outside of town. Then, on September 15, 1868, John Purcell gifted a section of his territory to the residents for a burial ground with three conditions. First, Purcell stipulated that the cemetery be kept in the hands of a Purisima Cemetery Association; second, he said that no fees would be charged. The third requirement was that land be set aside for a Purcell family plot. The deed also reserved a section of land 150′ by 500′, in the north-east portion of the parcel, for a Protestant church.

The first person to be interred in the new cemetery was a little boy named Downing, and some believe his spirit haunts the site. Legend has it that he was buried alive – that he was only in a coma. Shortly after the funeral, another of the townsfolk suffering similar symptoms, fell into a stupor. The Downing boy’s father, fearing that his son had been unconscious but not dead, opened the grave and found that the body had turned over.

There are fewer than 20 headstones remaining, though records show that up to 200 Purisimites were laid to rest. A surviving grave stone memorializes one of the town fathers, Henry Dobbel, who once employed 50 men to plant and harvest wheat, barley, and potatoes. Hugely successful – for a time – Dobbel built a two-story, 17 room mansion, on the south side of Purisima Creek.

By the early 1870s, Purisima had a post office, several stores, a school, a one-story hotel known as the Purssima House and other buildings. The general store was built by Henry Husing – Henry Dobbel bought it, only to encounter financial difficulties when he extended credit to too many of his customers. There were a series of crop failures that impacted the entire community and Dobbel’s fortune went the way of the town’s. He went bankrupt in 1890 and sold his estate to Henry Cowell. Both he and his wife are buried in the cemetery.

As the town of Purisima went into decline, Half Moon Bay thrived, becoming the commercial center of the coast. A few residents of Purisima remained as late as the 1930s, but the town was largely abandoned before World War II.

Today the cemetery, townsite and school yard are held as historic resources by the California Coastal Conservancy. Their plans include opening the unused portion of the cemetery for green burials. To visit, take Highway One south from Half Moon Bay, four miles to Verde Road. Turn left on Verde. Just before Verde veers south, and Purisima Creek road runs east, you will see a power pole with two transformers on your right. The single track up the embankment and through the blackberries, will lead you to the cemetery. Stop by Highway 92 Succulents nursery on your way to Half Moon Bay, and I’ll draw you a map.

The site is a popular one for ghost hunters. I found the following at Strange USA.com “I’m a member of a paranormal group, We’ve been on many investigations at this site and always come back with EVP’s …there’s not a lot of history documented on the town of Purisima just search around on the web. It’s a fun place to go! Watch out for poison oak though!”