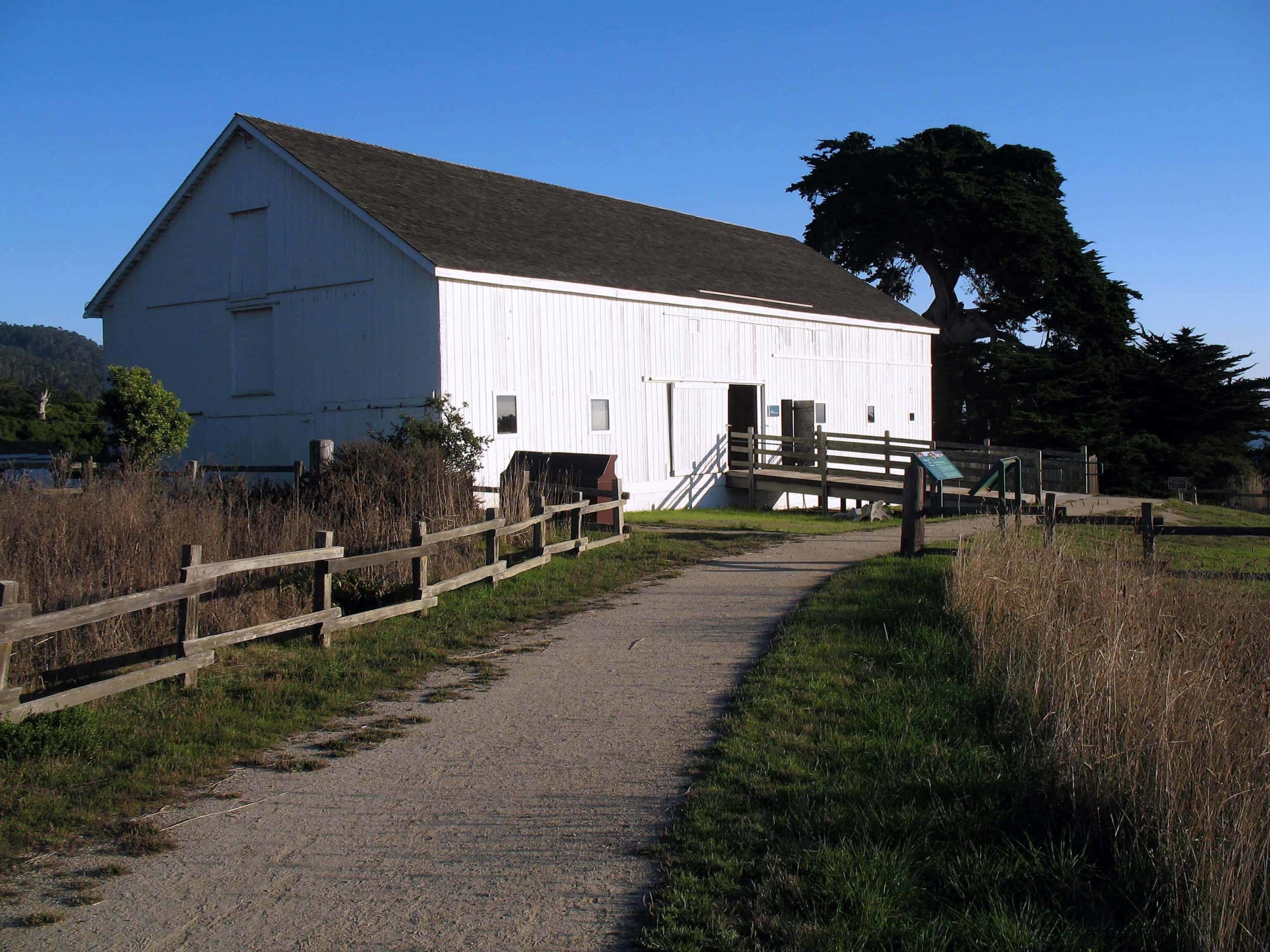 In “you-pick” season I frequent the strawberry fields on the coast. The fruit-laden plants are beautiful to behold, but they’re a fairly recent addition to the landscape. In the nineteenth century, it was grazing that provided income for the county’s earliest European residents; first cattle for hides and tallow, followed by dairy herds brought from the east. There are still reminders of the early San Mateo coast dairy industry – the Dickerman-Steele Barn at Año Nuevo State Reserve is one of them. It now houses the park’s visitor center. If your visit to Highway 92 Succulents nursery takes you on a scenic drive past Half Moon Bay, check out the Dickerman Barn.

The Dickerman-Steele Barn measures 40′ x 91’; its height is comparable to three stories with a gable roof. It was built of prime redwood between 1878 and 1880, and is a style of barn generally found in the eastern part of the United States. The builders used construction techniques common to Ohio and New York, employing pegs, bracing and roof supports. The size and quality of the redwood that was milled for the project is impressive. Wide, full height redwood vertical boards sheath the exterior. Huge redwood 18″ uprights are joined by tenon and mortise with two foot long, one inch diameter wooden pegs. These are still tight and secure – as if an integral part of the original wood member. The barn’s exterior and interior were originally painted white.

After the turn of the century, the bank of milking stalls was modified to house fewer cows. It’s impossible to date changes to the barn arrangement, but a partial concrete floor at the north end is a modern renovation. As the dairy evolved to dry farming and row crops, the barn also evolved.

Frederick Steele had been the first in his family to come to California. He was stationed with the U.S. Army following the end of the Mexican War, and described the land in glowing terms to his brothers in Ohio. George Steele and his cousin Rensselaer came west in1855, settling in Sonoma County. A dozen other relatives followed. They began to make cheese, shipping it to San Francisco, where it found an appreciative and hungry audience. The demand drove expansion. In 1861, Isaac Steele surveyed the coast south and found ideal grazing lands at the Rancho Punta del Año Nuevo.

Soon after arriving, the Steeles gave William W. Waddell (who was living in the canyon south of Año Nuevo) a right-of-way across their property for a landing and wharf. He’d chose a spot approximately 500 yards west of Año Nuevo Creek, where the water was deep and there were no dangerous reefs. By 1864, Waddell completed his 700- foot pier with a swinging chute to serve deep water schooners. By 1867, the wharf was handling two million feet of lumber per year.

For the next 13 years, the wharf served Waddell’s mill, and other mills in the region. The presence of the wharf helped to create a small community which became known as Waddell’s Landing and included a lumber yard, warehouse, and store/post office. Rensselaer’s brother, Horace Samuel Steele, became the postmaster. The store remained in place until the early 1950s.

1863 was a disastrous year for most cattlemen across the state, but the Steeles weathered the calamity. The drought that struck so severely in southern California wasn’t felt on the foggy San Mateo Coast. The demand for cheese was high, bringing 25 cents per pound. The Steeles prospered, selling both cheese and butter, with Waddell’s wharf serving as a point of embarkation.

By 1867, the Steele Ranches extended from Gazos Creek on the north, to the Santa Cruz County line on the south. Their holdings included 15,000 acres and 750 cows. There were also 2,000 head of steer, calves, young cattle and hogs. Wild grasses and oats generally provided enough food for the animals, although they were supplemented with grain, hay, and straw during periods of extreme drought.

By the early 1870s, the Steele Brothers were reportedly the second largest owners of milk cows in the state. They dissolved their partnership in 1872, although each of the members continued in the dairying business. Isaac and Rensselaer remained in the Año Nuevo area, continuing operation into the 1880s, at which time the holdings were subdivided among their descendants. In 1878, Effie Steele married Edwin Dickerman, who was working at Waddell’s Wharf, and they received the portion of Isaac’s ranch that now encompasses the Ano Nuevo headquarters area.

Following World War I, an economic depression struck the dairying business in the United States, and many small operators went out of business. The Steele’s were not immune, and an eventual conversion to row crops was begun. The Steele Family pioneered irrigation and farm conservation; they had already begun planting row crops in the early 1900s. Water was used to irrigate artichokes, Brussels sprouts, broccoli, lettuce, cabbage and – my favorite – strawberries. Though the ranches continued to produce cheese up to the 1920s, the Steele family had shifted from dairy to field crops by the 1930s.

The Dickerman redwood barn still stands at Ano Neuvo State Park. It is listed on the National Register of Historic Places.