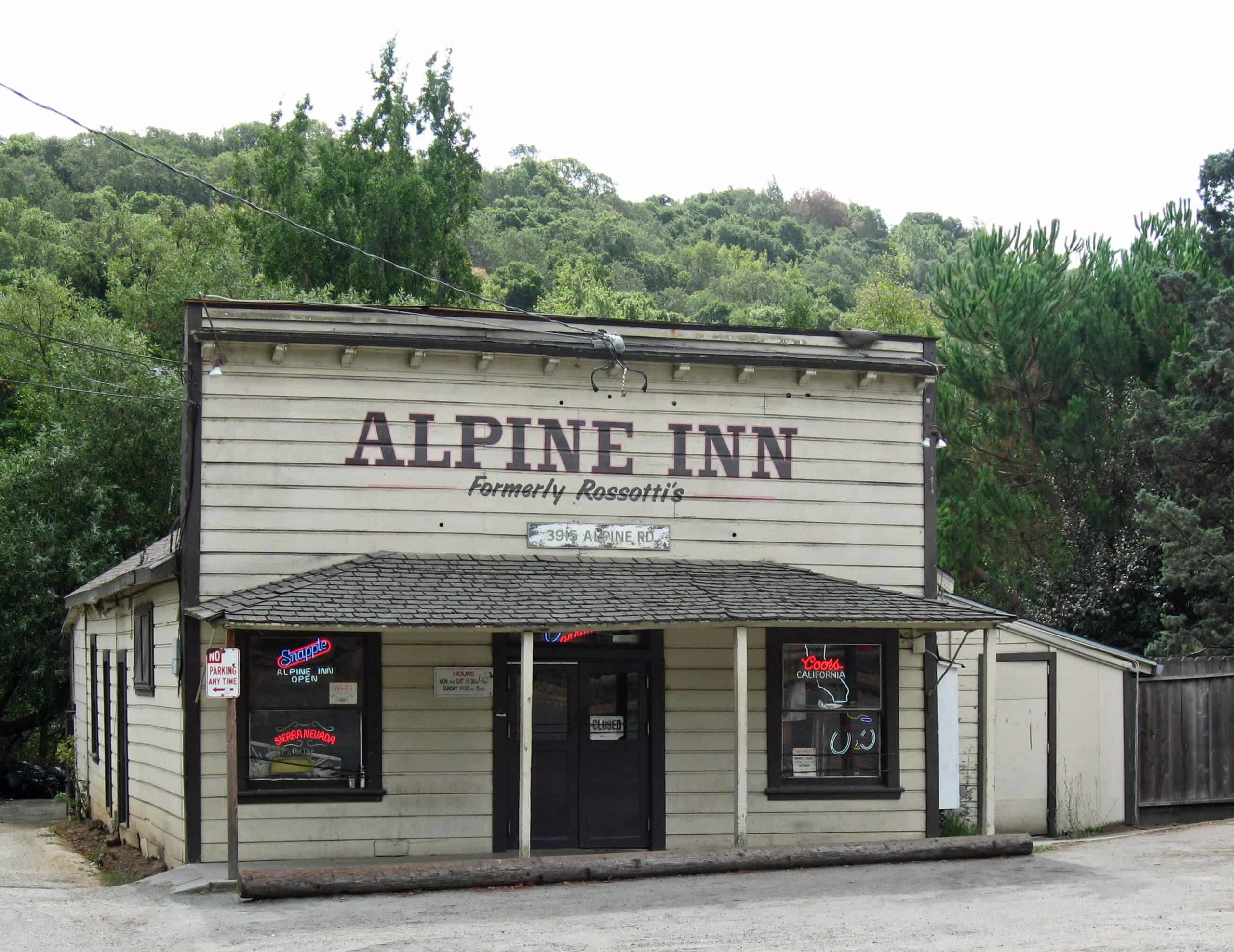 In September I read a Yelp review by Drew L., a self-described “regular” at Zott’s, and I was charmed. To quote a few lines:

“If you come here and you don’t have a good time, especially if the weather is nice and you’re outside, then you should pause, reflect, and ask yourself how you got here in the first place. Because that’s what Zott’s is all about. And that’s why people spend a lifetime coming here. Why their funeral wakes are held out in the back garden. And why they deserve their memorial plaque on the back wall. “
Who wouldn’t want to be a part of all that? If you’re coming to Highway 92 Succulents nursery in Half Moon Bay, and coming from the south, you might want to stop for a bite on your way to or from.

The Alpine Inn, or Rosotti’s or “Zott’s”, first opened as a casa de tableta, a roadhouse with card tables. The structure appears unremarkable at first glance, but a bronze plaque commemorates its continuous operation. Patrons that have taken refreshment at Zott’s since 1852.

Felix Buelna opened the casa a few years after independent Mexicans yielded rule to the Americans. With the shift in power came a change in the official language and customs of California. Buelna was an alcalde (mayor) of San Jose for three terms, and like other influential Californios, tried to be a part of the new government. Disillusioned, he eventually withdrew to the isolation of Portola Valley. He settled on 95 acres given to him by his friend Maximo Martinez, a Californio who’d successfully defended his claim before the Lands Commission.

New Yankee ordinances prohibited Sunday gambling, bear and bull fighting and other traditional Mexican recreations. Buelna opened his roadhouse on the Old Spanish Trail, which was out-of-the-way enough that he and his countrymen could enjoy a little dancing and monte. It became a place of community and the business did well, but
Buelna’s personal gambling habit drove him into bankruptcy. Legend has it that he sold the roadhouse to cover poker debts.

For the next century, ownership of the Alpine Inn changed hands numerous times, to a cast of colorful characters including F. Rodriguez Crovello, known to his customers as “Black Chapete”. When Stanford opened in 1891, students soon discovered the liquid refreshment at Black Chapete’s, an oasis beyond “dry” Palo Alto. The University pressured San Mateo County officials to close the saloon – for the benefit of the young, impressionable students – but county officials did nothing. Saloon keepers and related interests dominated local politics at the time; the publicity only increased the popularity of the roadhouse. Local ranchers, farm workers and draymen continued to patronize the establishment, but it was Stanford students who made it a profitable business.

In 1909 the State of California passed a law prohibiting the sale of liquor within 1 1/2 miles of schools and universities, including Stanford, which resulted in the closure of 14 saloons in Menlo Park, but left the casa- just outside the new limit – unaffected. With much of the competition removed, the saloon’s business boomed.

During World War I, the U.S. Army created a dry zone around Camp Fremont in Menlo Park but – once again – the roadhouse fell outside the boundary. Soldiers joined locals and students for liquid refreshment.

The nation became “dry” with the passage of the Volstead Act of 1919, but Illegal liquor activity in San Mateo County increased. Shipments were smuggled into the county via the long coastline. The Alpine Road establishment was reinvented as “Schenkel’s Picnic Park” and San Franciscans allegedly came to enjoy the countryside. Advertised non-alcoholic beverages were sold, but more potent beverages were available to those in the know.

When prohibition ended in 1933, Stanford students exuberantly returned and Schenkel retired. The lease passed to Enrico Rossotti, who eventually purchased the property and ran the popular establishment until 1956. Mr. and Mrs. Rossotti offered more than beverages; they added grilled food. Football crowds came in droves on Stanford game days. Alumni and families came in greater numbers.

Don Horther and John Alexander took over the roadhouse in 1956 and renamed it the “Alpine Inn Beer Garden”–but patrons today continue to refer to it as “Rossotti’s” or just “Zott’s.”

The Alpine Inn still caters to a loyal clientele. The outdoor beer garden is filled with an eclectic mix of travelers and locals, Silicon Valley engineers, hikers and bikers. Some say the idea for the internet was first discussed at one of the picnic tables. It’s an historic landmark you can visit and enjoy as as originally intended – 160 years ago. Pick up a deck of cards and start a game of your own at one of the outside tables.